Last year my dream BFF, Lauren Conrad, posted this adorable tutorial on Easter egg macaroon nests! I will do most anything she tells me to, so I thought I would give these a try! Now, while I don’t like coconut, I am a huge fan of Cadbury eggs. Boy, I could eat these every day of the year! Cadbury is the Beyoncé of chocolate world, or so I learned when I studied abroad in the U.K. One of my flatmates had a diet that consisted of cheesy chips, jacket potato, and Cadbury Dairy Milk. My hero. While I was over there, I gobbled up all the Cadbury goodies I could find while I was there! Then, when I returned home after 5 months, American Cadbury just did not compare! It is manufactured here in the U.S. by Hershey but tastes completely different! The girls sent me a care package with real Cadbury chocolate so I was able to compare, and the American version is chalky, compared to that silky creamy U.K. Cadbury dream. Yet somehow, when it comes to these Cadbury mini eggs, they taste just like they did when I lived in England, and I’m transported back to my semester at Newcastle. That or I’ve just been gone way too long 😦

Regardless, these Cadbury mini eggs bring back some great memories and they are delicious! Not to mention adorable!

So I thought I saw this as a great opportunity to finally make coconut macaroon and decorate them for Easter! Although Lauren inspired me to make these Coconut Macaroon Nests, I decided to use this recipe. There are a lot of variations of Easter macaroon nests. Some use caramel or nutella to fill the nest, but I chose this recipe because it uses melted semi-sweet chocolate for the center, which is so simple.

The macaroons contain only a few ingredients: sweetened condensed milk, coconut, egg white, and a bit of salt and vanilla extract. That’s it! I do want to make a clarification about the sweetened flaked coconut. The recipe calls for 4 1/4 cups so I bought two 14 ounce bags thinking, well 8 ounces are in a cup. Wrong! One 14 ounce bag equaled 4 1/4 cups when poured into a measuring cup so just FYI. Other recipes are more explicit when stating one 14 ounce bag of coconut.

I was able to make 12 nests, 6 per tray. I baked one tray on silpat and one on parchment paper. Apparently, this made a huge difference when baking! I thought I had made some huge mistake in this recipe because the dough/batter was real wet and sticky when I tried to drop it on the baking sheets to make the nests. I should have gone with my gut and added more coconut or even flour. But I baked it as it was, and after a short time, my nests quickly started melting and flattening out. This was the batch on the silpat. I had to bake them an extra 5 minutes at least, and they still did not cook all the way through. They were difficult to remove even after cooling. They were a big ole sticky coconut mess, and still tasted good but ultimately were not fully baked.

For some reason, the parchment paper batch faired so much better! They flattened out some, but browned beautifully. I had to cut off the browned edges so they had more of a nest shape. And they cooked through perfectly and removing them from the tray was a breeze! I had 6 perfect looking nests, so at least I’ve got that going for me! 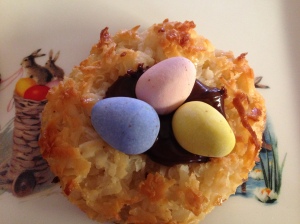 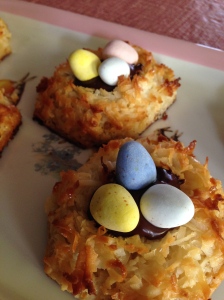 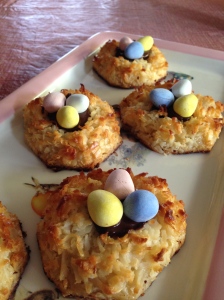 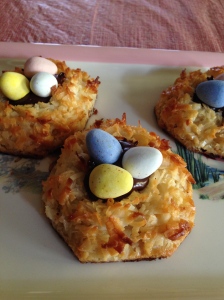